Print Your Own Pipe Markers

An important decision while developing your lockout program is choosing between keyed alike or keyed different lockout tagout padlocks. What’s the difference? In short, the answer is in the names.

Keyed different locks are opened by their own unique, different key. Keyed alike means one key opens multiple alike locks. Simple at its core? Yes. But when it comes to lockout tagout, there’s a lot on the line, including worker safety, OSHA compliance, operational efficiency during equipment maintenance and more. Keyed alike or different locks offer both common and different benefits in each. Let’s break it down.

What are keyed different padlocks?

Keyed different means that each lock is opened by its own unique key. They’re often best utilized as a personal lock assigned to authorized personnel, which ensures each employee has exclusive control over his or her lockout padlock. This keying system is ideal for simple lockout applications dealing with a manageable number of energy isolation points. Each facility defines “manageable” differently, and it’s why every lockout program is unique. But, in general, simple lockout applications for keyed different locks deal with one to two isolation points.

What are keyed alike padlocks?

Keyed alike means that each lock in a group can be opened with the same key. This keying system reduces the number of keys needed to be carried by a worker. It’s ideal for individuals or trades responsible for locking out machines with multiple isolation points. 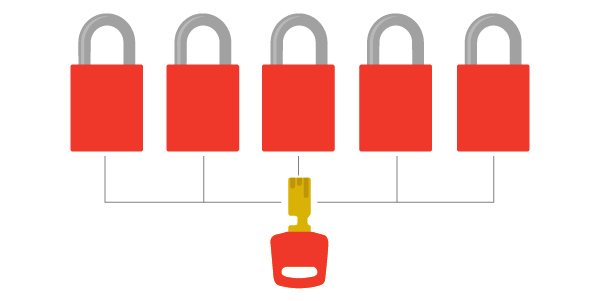 While not specifically mentioned, the portion of OSHA’s lockout tagout standard that most closely applies to keyed padlocks is 29 CFR 1910.147(c)(5) OSHA Lockout Device Requirements. This section states that lockout devices must:

The final bullet applies most directly to the issue of keyed different vs keyed alike, specifically OSHA’s "one person, one lock, one key" guidance. Keyed alike locks should never be split among multiple employees, as that would mean more than one employee could open the same lock, and thereby increase the risk of accidental re-energization. 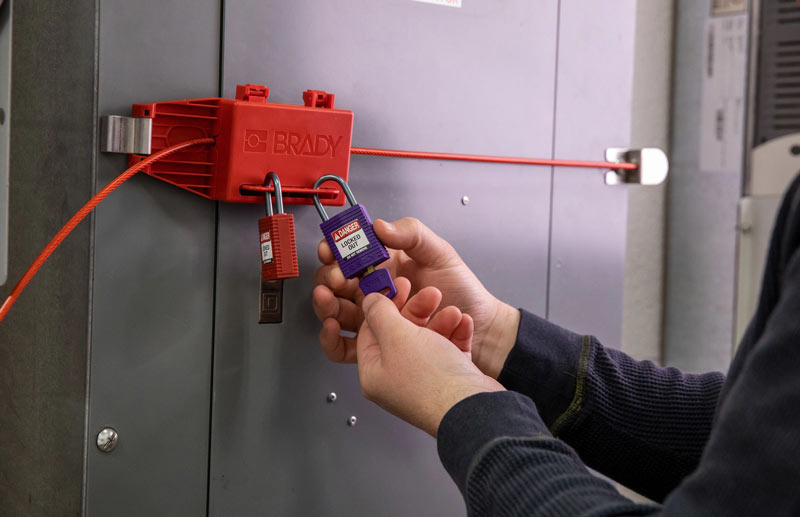 When to use keyed different padlocks: 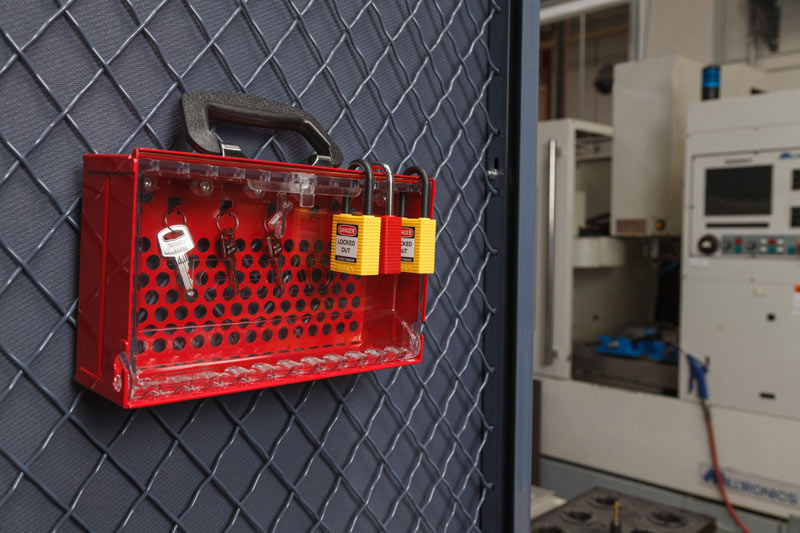 When to use keyed alike padlocks: 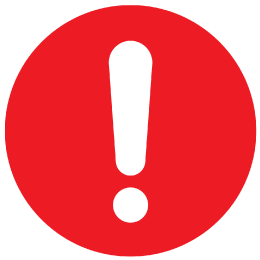 Compliance reminder! If used improperly through sharing, keyed alike lockout padlocks can be less secure than their keyed different counterparts. Keyed alike locks should never be split among multiple employees because it violates OSHA’s "one person, one lock, one key” guidance. So in this case, a more appropriate mantra would be “one person, one unique key code.”

In a master keyed scenario, each group of locks, whether keyed alike or keyed different, can be opened with a single master key. This is useful for larger complex systems when supervisory access may be required. 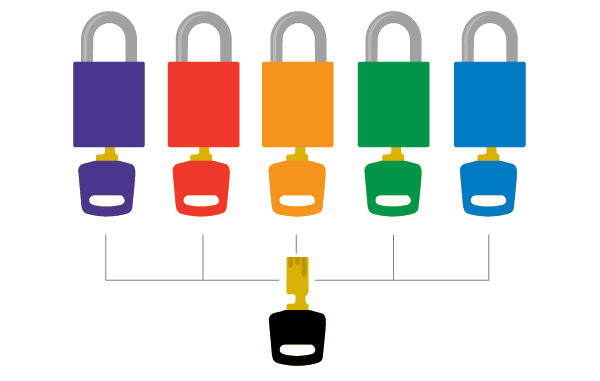 The grand master key can open all locks grouped into two or more master-keyed systems. This system is useful when supervisory or managerial access to all locks is needed. Grand master keyed scenarios are critical to complex lockout tagout programs, such as those with numerous employees, machines and locations. 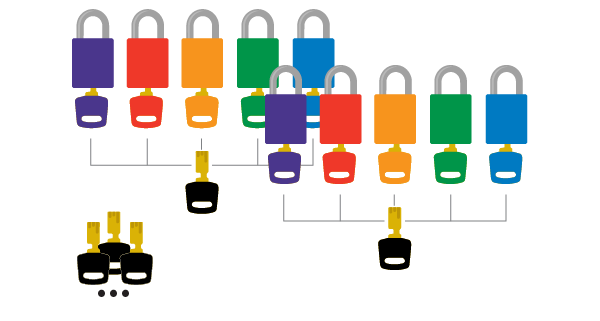 How keying options fit into an overall lockout tagout program

Never split keyed alike lockout devices among multiple employees, as this violates 29 CFR 1910.147(c)(5) OSHA Lockout Device Requirements. It states: “Whenever lockout devices are applied, they must remain under the exclusive control of the individual who attached them; no employee should be able to open a lock attached by someone else.” This is commonly referred to as “one person, one lock, one key.” 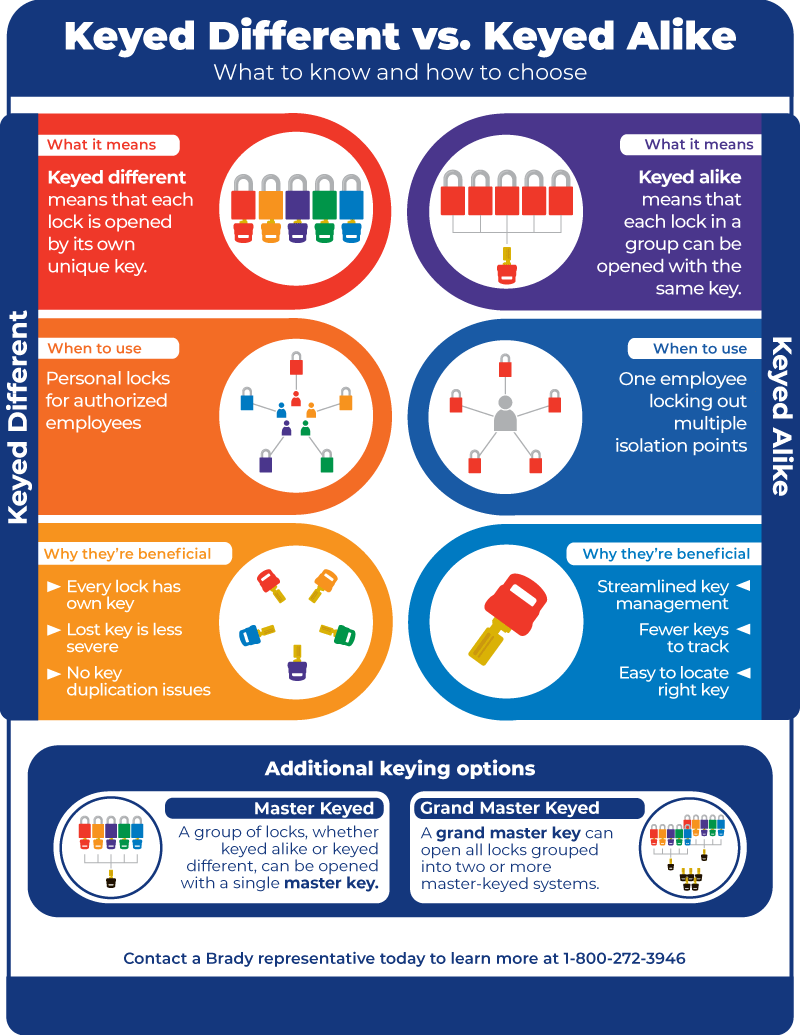 Brady is your full-service partner

No matter where you are or what you need in your lockout program, Brady can help. Our comprehensive lockout programs are customized in partnership with you through a wide range of services to meet your requirements, keep your employees safe and ensure your compliance. Learn more about Brady’s lockout tagout services. 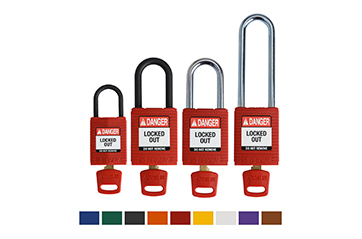 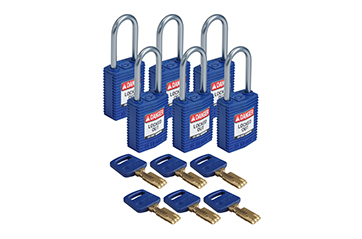 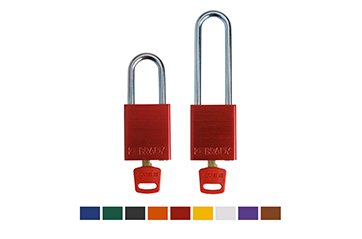 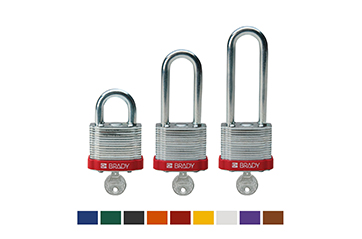 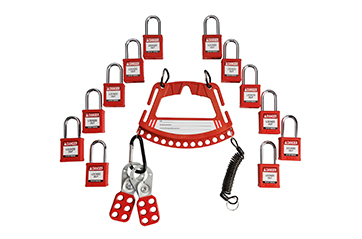 What sets lockout padlocks apart? A lot, including color, keying and more. Learn how to pick the right lock for the job.
Discover Features

Need a nudge in the right direction? Answer a few expert-curated questions and we’ll recommend the padlock that’s best for you.
Select Your Padlock
×